Are You A Fat Dad?

We’ve all seen it. The overweight guy sitting under the umbrella at the beach, still wearing his t-shirt despite the 100 degree temperature. We all know he’s hiding (or trying to hide) his over sized gut.

Of course this a natural reaction to looking and feeling like shit. You want to hide it because you are ashamed and embarrassed. You don’t want to be fat, but you are.

How did this happen to you?

I don’t have to tell you that this didn’t happen overnight. You worked long and hard at eating late night Burger King, drinking those delicious Budweiser beers on Sundays, and sitting on your ass all day at work and then all night watching tv after the kids are asleep.

But I’m not blaming you entirely for this. Sure you could have made better food choices, kept exercising when you had no motivation to do it, and been in far better shape because of that.

To be perfectly honest, I have never been a fat dad. My metabolism was incredible fast most of my life. It wasn’t until I was in my thirties that it started to slow and even then, it was hard for me to add weight.

But after 10 years of sitting on my ass in a cubicle, I had developed a spare tire, although small, around my waist. To put this into perspective, I spent my twenties walking around at about 160 pounds and 8% bodyfat.

In my late thirties, I was about 185 and 18% bodyfat. To some that will still seem reasonably fit, but to me it’s completely out of shape.And after I got separated in December of 2012, things went from bad to worse.

I stopped exercising, ate like shit, and walked around in a sad and depressed state most of the day. It got to the point where I didn’t want to do much of anything at all.

And it wasn’t until I received a much needed kick in the ass wake up call that I decided to change.

And so I did. I started exercising again, although I could barely run half a mile without stopping, started eating better, and started doing things that made my happy.

And since that time, I’ve gotten myself into the best shape of my life. At 43, I feel great and have a way better outlook on life that I had for a long, long time.

So I know for a fact that if I can turn my shit around, so can you. And I’m here to help you with it every step of the way. 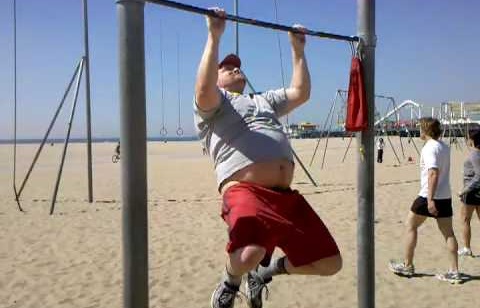 When I look around at a park, a mall, or really anywhere at all, I see families. And I see middle aged dad’s doing their best to keep up with their young children and many times, unsuccessfully so.

The other day I was at a park training a client of mine when a man and his son started playing on the monkey bars. I could tell he probably had played sports 20 years previous and had done very little to stay in shape since. He wasn’t fat, but didn’t have much muscle either.

He was average in height, weight, and sported a nice little beer belly. He had virtually no muscles that were visible and I could tell he was trying his best to show of his (former) strength by doing pullups (unsuccessfully) in front of his family.

I’m not judging him at all and in fact millions of men are in the same boat. The fact is that he was the typical American dad.

And this is what I call the fat dad syndrome.

It’s when a man reaches a certain age were his metabolism has slowed down considerably and his life and all its constraints and stress have taken his focus away from being fit and healthy and instead left him in survival mode.

Throw in a sit-on-your-ass desk job for 2,000 hours a year and you’ve got a recipe for a fat dad.

I know this is true because I have not only seen it time and time again, but also live it. I have 2 daughters and when they were born, my health fell to shit. I was a mess and couldn’t find time and/or energy to do much of anything except for going to work to pay the bills and playing with my girls.

And as a fitness professional, I was truly struggling to keep my head above water. For the average Joe, it’s much harder.

You Don’t Have To Be A Fat Dad

But I can tell you that you don’t have to be a fat dad, regardless whether you think your metabolism is too slow, you’re too old, or you just don’t have the genetic make up to be muscular and fit. It’s bullshit and I know that for certain.

We all have the same time in our days. We all have stress. We have children, mortgages, shitty jobs, loads of debt, and a whole host of other issues. It’s all how we choose to spend our time and if we are willing to commit to living a healthier life. That’s it.

And it’s SO worth it!

I’ve seen and helped obese desk jockey’s lose incredible amounts of weight and become healthy again. I’ve seen men that had given up on ever looking good again, stand in front of the mirror in pure awe. And I’ve helped men who have never been able to add muscle to their frame, bulk up and be damn proud of their bodies.

I tell you this because there are millions upon millions of fat dad’s out there and you are one of them. And I know you desperately want to look great, feel attractive to the opposite sex (even if you’re married and your wife doesn’t give a shit what you look like), have more energy, and walk down the middle of the Las Vegas strip (or your office break room) feeling confident and cocksure.

And you can do it. It will take work, yes. It will be hard, yes. It will suck not eating Nachos Belle Grande and chugging Coke’s three times a week, but guess what?

It will be so worth it when you take your shirt off next summer and people can actually see your muscles (and dare I say your abs?!?).

So let’s get started….