Climbing Out Of The Hole

This is a post written by Fit Dad Nation member, Steve Fryzlewicz

Ending up in a hole sucks. Getting out of that hole feels pretty awesome.

I’m going to share with you my journey of my “post married life” hole that I fell into and some of the things I did to get myself out. It isn’t easy to do, but it can be done. I did it, and if you feel you are in a hole I promise you, you can do it too.

It just takes some work.

I was slowly sliding into my hole during the entire process of getting divorced. My job sucked, I hated my boss, I was moving out of the house I planned to retire in, plus I was losing the comfort of living in a great community with great neighbors who I did everything with for the previous 7 years of my life.

I went from that to moving into an 864 square foot house that is on a street with 5 other houses, of which only 2 have permanent residents, with the other 3 being rentals.

In addition, I was leaving the gym that I had trained at for the past 7 years and a great friend who I lifted with and pushed me to excel when we trained.

I had it in my head, “I’ll be fine, I’ll turn the job around, the house isn’t that small, I’ll make friends with some of the neighbors, I’ll find a new training partner, oh yeah, and I’ll find a new woman too!”

About the only thing I nailed on that list was becoming great friends with my neighbors, Ron and Jean, who live next door and have been married for 61 years. They’re the best neighbors ever.

Everything that I am going to talk about from this point forward happened to me between November 2014 and December 2015. This was the time the hole had me sucked in. And when I say “sucked”, it did.

Here’s how it all went down: I’m freshly divorced in my 864 square foot mansion with two beds, a dresser, couch, television, Kuerig coffee maker and my Weber grill that I got out of the divorce.

Things were good with my daughter, but adjusting to having her for a week on, and then a week off was rough. I’d take her to her mom’s on Sunday night and on Monday’s I was a depressed zombie.

I did almost nothing.

I hated Monday’s. My job was sucking but I was working on a big sales deal with a great customer and it was going to save my year. I was training like a beast at the gym because my membership was up on December 31st and my friend Larry and I were on our way to some PR’s.

Even with the divorce and work being bad, I still had the gym.

The iron was good to me; helped me with my sanity. I even met a woman at a wine tasting event and we were having fun. Not too bad right?

December rolled around and I was still working my big deal. The customer was coaching me on what we needed to do to win it. We had it. But unfortunately we didn’t. We couldn’t meet the specs that were required and ultimately we lost the deal. It ruined my year and it ruined my Christmas. I went from being knee deep to eyeball level in the hole.

I was still killing it at the gym though. On the last week of December, I hit my PR goals for deadlift (365 lbs for 3 reps) and squats (305 lbs for 3 reps). But that’s also when my membership expired. Was time to move on.

The new year rolled around with little fanfare.

I was still super depressed on Monday’s when I dropped my daughter off so I rescued a cat. Tommy became my best friend and companion and it did help having him around.

I was still dating the wine tasting woman and I volunteered to coach my daughter in a church basketball league. Coaching gave me extra time with my daughter every Saturday and the experience of coaching 8-10 year-old girls was pretty awesome.

Some of the dads were nice enough to invite me to play on the men’s league that played on Tuesday nights at the church. The job was the job. I was still grinding there.

Making some smaller sales deals and keeping the money coming in. Although, it seemed like every time I did sell something, my commission checks went to repairs on my SUV. I mean every commission dollar that I earned went into that truck.

I did find a new gym and started training there. Total meathead powerlifter joint. It was going to be great. I wasn’t sinking any further in the hole. Life was “good.”

By the time February rolled around I was ready to step on the court with the “church dads” and show them what I could do. I had played basketball in high school and while I was in the Army. I could hoop it up a little.

Small side note – the last time I had played basketball was 6 weeks before my wedding in 2001. On that day I tore my Achilles tendon in a tournament. I even shared that with the guys I was playing with.

Well, wouldn’t you know it, about an hour and a half into playing I went up for a rebound and, you guessed it, BOOM! The “good” Achilles exploded upon my return to the floor. Complete tear. Hello orthopedic surgery, sedentary lifestyle and a sweet scooter. Good bye basketball, good bye lifting. This is where the hole got really deep, really fast.

How Did This Happen?

I was now laid up in my 864 square foot mansion. I was feeling oh so great about being divorced, having a crappy job, not making any money, owning a truck that broke down all the time and being depressed every other Monday after my daughter went back to her mom’s.

I remembered sitting in my living room thinking “how did this happen? How did I get here? Why me?”

I’ll fast forward to summer. I was now single again and I will say that being single in the summer of that year was about the only thing good that happened to me (sort of).

Maybe I was owed it or something after the winter and spring that I had. The only problem about having a great summer was that I spent all my time partying and drinking.

The only thing I cared about was my daughter and the next good time. I was out of control. I was so deep in the hole that I couldn’t see the light. Heck, I didn’t even care if there was even a light on at that point. That’s when a friend stepped in and got me back to thinking right.

Journey Out Of The Hole

That’s when I started my journey out of my personal hole.

My friend and I met for dinner one evening and he brought some pictures from one of my “I don’t care” summer outings on his boat. There were a bunch of fun pics from that day, then I got to the last one.

It was a picture of me, with my shirt off, and I was a mess. The smile immediately came off my face and my friend said “you’re looking pretty soft.” I looked at picture over and over. I felt sick to my stomach.

What the hell did I do to myself?

I went from being in the best shape of my life to a chubby, non-lifting, beer drinking party animal who still had a bad job and I did it all in the span of about 9 months. It made me mad. I was pissed, actually.

The combination of his words and that picture sparked a change. Once my spark hit me, I was back. I got clarity that day. The light at the top of the hole was visible again. Now I had to get out of that hole. I just had to get at it. I also needed to find another job.

It was time for some major changes.

I told you earlier about the meathead powerlifter gym. Well, I hated it, so I quit. I was going to climb out of the hole without the one thing that I really loved to do. I still had some “I don’t care” in me at that time. I decided I was going to do it by cleaning up my diet and by walking.

I quit my partying ways, got rid of the beers and got to walking every morning. I’d walk 6 miles a day. Rain or shine, sun or snow. I was out there getting it done.

I’d set my alarm for 4:45 in the morning on the weeks that I had my daughter so that I could get my walk done before having to take her to school. For eating I opted to follow the “Slow Carb Diet” that I read about in “The Four Hour Body” by Tim Ferriss.

Those two things helped me tremendously both physically and mentally. I also got to work on finding a new job. I contacted a bunch of my industry contacts and sure enough, a friend from my past had a sales position that I applied for and got. It’s by far the best job I’ve had in my professional career.

Getting Back My Sanity

The hole I was in kept getting shallower and shallower. I was back to making great money and the pounds were falling off. I enjoyed my walks. They gave my mind a chance to relax, unwind, to not think about or worry about things.

I seriously gained my sanity on my 6-mile loop. Walking and proper eating helped me to lose 26 lbs over about 12 weeks. I still walk all the time. My goal is to walk 6 days a week. I still get up early when my daughter is with me and I still eat clean for the most part.

Guys, we’re all going to end up in a hole at some part of our lives. I spent a good amount of time in mine. I know what it’s like to say “I don’t care.” I said it a lot.

My advice to you is that you need to find that spark. Tell that inner voice in your head to shut up.

Picture and those words, those were my spark. Once that spark ignites, you’ve got to grab it and you’ve got to run with it (or walk like I did). You owe it to your children and yourself to make the changes that ultimately lead to you having the best life that you can.

The only person who can do it is you. You can only do it when you are really ready to do it. Just know that you can.

My challenge to you is this: Get out and walk. Go as far as your body can take you. No headphones, no social media. Escape from life for a few miles and see what it can do for you.

You can walk your way right out that hole you’re in. 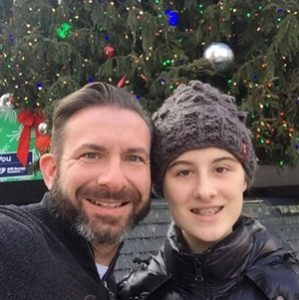 Steve is a service sales specialist for Accuracy Incorporated and a single father to his daughter, Olivia.