This is a post from a member of the Fit Dad Nation,  Mike Sullivan.

When I was a kid, I was the person I once grew to dislike out of nothing but pure jealousy.  I was the kid who could eat whatever I wanted and not gain an ounce.  I remember snickering to myself as my older, and much heavier, brother was put on diets with little to no results.  I would not go out of my way to be cruel and eat in front of him, but I wouldn’t hide it from him either.  All of my carefree feelings towards my “natural skinniness” came crashing down around Middle School.

I was in 7th Grade when a classmate told me I had a beer gut.  I had no idea what this meant, so it didn’t bother me in the least.  Over time, the teasing about my weight became more and more frequent and more and more cruel.  I would go home and tell my family what was being said, and being what they thought was helpful, told me everything they thought I needed to hear to maintain self-esteem.  “As long as you can see your feet, you aren’t fat,” was something I lived by for a long time.  As my weight went up I would check for my feet, not realizing the huge disservice that I was now doing to myself.

College and a few years after is now a blur, one that was filled with fast food, beer, and a complete lack of care about the way I looked, and even less about the way I felt.  Each physical ailment I felt I convinced myself was a hangover and I would lay low for a while.  I finally went to see a doctor after seeing blood in my stool, and the first thing I had to do was get on the scale, which I tipped at 235lbs (I’m just under 6’).  “That shit is way off…I have my clothes and shoes on and the scale is on the rug,” is the way I justified that number.  I was diagnosed with Acid Reflux, and yet I wasn’t ready to change.

Years later, I went to the doctor again, this time thinking I was having a heart issues (Acid Reflux was just flaring up), and this time I hit 293lbs on the scale.  2-9-3! “What the f***” was all I could say to myself over and over.  I was shocked, appalled, and embarrassed beyond comprehension.  Luckily, I had a very fit friend, who decided to be more than a party buddy.  He challenged me to complete a triathlon with him, which I agreed to do.  I did it all wrong, crash dieting, and ramping up training too quickly, but I got it done.  I got my weight down to 178lbs at my lowest, and was raced a few triathlons, doing pretty well.  So, that’s the end, it learned my way?  Wrong.

After my triathlon and weight loss experience, I began to experience something I wasn’t completely new to; Depression.  On the surface, I had my shit together.  I went back to school to become a teacher, I got married, and I was still “fit.”  Deep down, I was a mess…an unhappy mess.  Although she is a good person, I knew I was in a marriage I didn’t want to be in.  Rather than face it, I ran from it and became detached.  I hid in beer and whatever food I wanted.  That marriage ended after just over two years.

Luckily, I met a wonderful woman shortly after.  I found happiness, but still didn’t find my fitness as a priority.  I would go through peaks and valleys, gaining and losing weight quickly.  It wasn’t until we found out we were pregnant last February that it hit me, “I’m going to be a dad, but I also know what it feels like to lose my dad young.”  I didn’t want that for my son, so I went all in on fitness.  I was a machine, working out 5-6 times a week for at least an hour.  Over the summer, I worked summer school for extra cash and to keep boredom away, and during my breaks I would fit in a second workout every day. I got myself down from 235lbs to 188lb and was feeling better than I ever have physically and mentally.

From the time Roman was born on October 9th until around Thanksgiving, I was back to my old ways of inconsistency and gaining and losing quickly.  I was once again great with the excuses…. “I’m celebrating my son,” “I worked out today so I can eat ____,” “I don’t have time anymore,” and every other line of bullshit I made myself believe.  It wasn’t until I re-evaluated why I wanted to get fit that I felt reassured that I am finally on the right path.  Now I know that this journey is not for immediate gratification, or just for my son to have a good role model for a couple of years.  I am now committed to living a better life for my entire family, not just for overall longevity, but also to be the best man and father I can be.

I am sure to make time for my fitness, mostly before work.  I’m not striving for the 6-pack abs, and bigger arms (although I am not trying to NOT get them either), but I am aiming for long-term health and habits that I can pass along to my family.  I am far from perfect, but I am now finally doing something I have never done before…seeking out the help and advice of others.  I am emerging myself into this community because I can learn from those who have been, and are in, my situation.  I am here to help in any way my amateur-self can.

My Fitness Journey has been long, and both successful and tragic in ways.  However, the road I took made me stronger at the time it is most important to be strong.  While my journey has spanned over the course of decades, my true journey is just beginning. 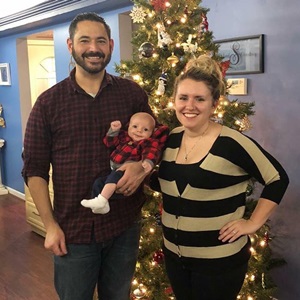 Mike is a new dad, husband, and social studies teacher who has tried, and mostly failed, to get fit for most of his adult life. He recently decided to take a smarter, more long-term approach to fitness rather than a quick fix and has been very active in our private Facebook group, the Fit Dad BaseCamp.