The other day, one of my clients mentioned he had been reading about something called a “dad bod”. I actually had never heard of it, so I did a little research.

What I found was a shitload of terrible posts talking about the new “craze” in men’s health and fitness: The dad bod.

As it turns out, a college girl named Mackenzie Pearson wrote an article in March called “Why Girls Love The Dad Bod”, and it stirred up quite a conversation online. Apparently being an average Joe with little muscle tone and a modest layer of fat is extremely desirable to millions of girls and women.

Who’d of thunk it.

According to Mackenzie the dad bod says, “I go to the gym occasionally, but I also drink heavily on the weekends and enjoy eating eight slices of pizza at a time. It’s not an overweight guy, but it isn’t one with washboard abs, either.”

Supposedly, the reasons for the dad bod being so desirable are:

Here’s what I say to that:

Here’s the definition from the Urban Dictionary and it sounds pretty spot on to me.

Can someone please tell me what is attractive about this???

OK, this is where shit gets crazy stupid..

I had to laugh when I came across an article titled Eat Your Way To A Dadbody This Summer, which tells us that in order to achieve this fantastic dad bod that millions of women are swooning for, we are to do the following:

“Each meal should have some element of the following: corn syrup, batter, melted cheese, and beer. Make sure to add the occasional super serving of synthetic protein to help develop the solid muscle beneath your flab layer.”

A typical day on the dad bod diet would look like the following:

Snack: A six-pack of Budweiser (potential sub, a 12-pack of Miller Lite)

Apparently, eating this way will get you looking as good as Adam Sandler or Russell Crowe (proud dad bod owners) in no time!

Every man (and woman’s dream!) 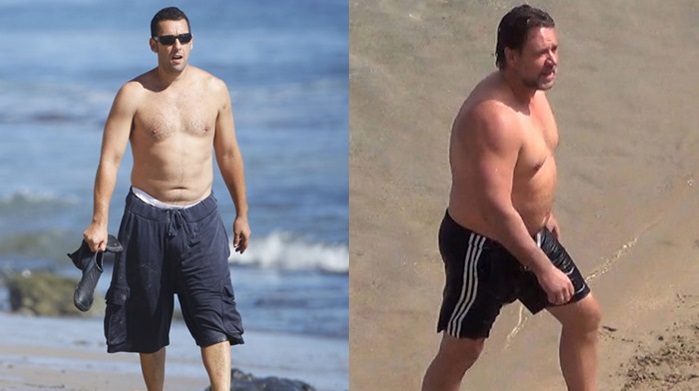 There’s Only One Small Problem…

I have to believe that much of the hype around this is nothing more than a ploy for websites to get views. I mean, can they honestly tell us that we should be eating chips and dip by the bucket full and expect not to die of <insert disease> here?

This Is Just Ridiculous

One site states that “super-shredded male bodies have long been held up as the ideal in media portrayals of attractiveness, but a quick glance around any public space in North America will prove that it’s far from the norm.”

This is true. It isn’t the norm nor should it be! That’s why it’s so fucking desirable! That is why we, as men, bust our asses in the gym, make diet sacrifices, and commit to living healthy lives. We don’t want to look like every other dud out there.

Isn’t there a reason that health clubs generate hundreds of millions of dollars annually? It’s because we want desperately not to look like we have a dad bod.

How are we supposed to adopt the dad bod mentality when we’ve been learning our entire lives that being lean, muscular, and fit is what women want and what we should be striving for?

Are we supposed to rewire our brains and tell ourselves that being a gelatinous lump of body fat is now desirable?

As a recent post by TheDailyBeast.com states “What a weekend for American men. For the first time in a long time they have been eyeing their paunches in the bathroom mirror, and thinking, “Yeah, looks pretty damned good,” and ordering a guilt-free pizza.”

You’re kidding me, right? Are men actually suddenly thinking their flabby stomachs are hot now? That’s never going to happen regardless of how much all the social media streams tell us so.

The #1 reason I train men is to not look like they have a dad bod and then working to avoid ever having it again. This kind of flies in the face of what all this dad bod hype is telling us.

Am I worried that my services will no longer be needed and that men will somehow adopt the “flab is good” mentality? Nah.

It just pisses me off to see stupid shit like this being circulated and seen by millions. But if you choose to stay soft and squishy, eat whole pizza’s in one sitting, and drink copious amounts of Anheuser-Busch products, that’s your decision.

I won’t tell you not to do it, but I just can’t believe that looking like a jelly donut will be considered attractive by men or women. Ever.

Just my 2 cents of course….

I could go on and on about how idiotic this fad is, but I’ll leave it here. Suffice it to say I’ll stick with eating quality foods, training hard, avoiding 7-11 nachos, and trying to keep lean and muscular.

So where are you with this? Are you happy with a dad bod or do you want a better physique?