Getting Back To The Old Me

Have you ever looked at a picture and had to do a double take because you know that’s you but for the first time you’re really seeing yourself?

It was 2008 and I was looking a picture of my wife and I on a cruise for our 10 year anniversary. I couldn’t take my eyes off the picture, not only because of my beautiful wife or the amazing scenery, but because standing in the middle of a picture was a guy I didn’t recognize.

A big man, bigger than I had ever been in my life, and I could see, for the first time, what I was letting myself become, an overweight, middle aged man.

How could this have happened? How did I go from being a competitive athlete, a driven kid, to an out shape, overweight, insecure, individual?

On And Off The Field

Growing up I always had two sides, the athletic side and everything else. If I saw something I went after it, I took it, and I made it my own. Sports were the one thing I was good at and this was my comfort zone. On the field I had one personality, off the field, however; it was another story.

I was a scrawny kid with a bad haircut and very low self-esteem. I used humor as my deflection, making fun of myself to fit in and always looked to please others, even at the expense of myself. Even in groups that I did fit into that weren’t sports related, I always told myself it wouldn’t last, sabotaging myself and creating self-doubt.

I started to lose myself and spent more time with food as a crutch instead of putting those efforts into getting back on the field. I left school and entered the job market. I found a new focus and was driven to succeed. I was passionate about succeeding and went above and beyond to get there.

Trying To Please Others

Once again I fell into wanting to please everyone and took the odds and end jobs, someone was needed to work extra hours, I was in, after all it would help in the long run right? Finding that balance between being a yes man and climbing the ladder were blurred and I put everything else aside to move up.

It was during this time that I also met my wife, got married, and took my first corporate job. My focus became more on career and family and having a job that was incentive based and I found that I didn’t have time to eat.

So my eating habits would consist of a soda and a candy bar for breakfast, possibly for lunch, and some fast food joint for dinner.

Again it became about pleasing others, making them like me, and wanting to be accepted. I lost myself in the pursuit of wanting to move up, making sure my wife was happy, and making sure everyone was taken care of. Taking care of everyone else was my number one priority.

As I climbed the first step of the corporate ladder I also found out our family was going to grow by one. I became more driven on making money, making sure my wife was comfortable, and my growing family was taken care. I again became more focused on everything else and spent less on what I was fueling my body with.

I will say that corporate life takes its toll on you; at least it did for me. For eight years I put in long hours, often times 80 hours a week, focused on making sure everyone was taken care of, only to be downsized in a merger. This was a stressful time which led to the stress of how to support a family and turning to food as a stress reliever.

I found a job quickly, but just as fast was miserable. The job took its toll on me mentally, physically, and even began taking a toll on my family. I was able to find another job which I enjoyed more but the pay was half what I was making, which still led to a stressful mindset and endless nibbling.

During this time I decided to go back to school to finish my degree and work to better myself for the family. While this was a start to improving my career, I still wasn’t seeing the big picture.

Remember that photograph I mentioned? It was during that vacation that I finally saw me and what I had become. I had gone from a 185 athlete to a 273 pound stressed out insecure blob.

I was happy with my family, I had a loving and supportive wife who never once critiqued my physical change, two beautiful daughters, but I hadn’t liked the man I was looking at in the mirror. The job changes had taken a toll on me, school was keeping me up to all hours, and trying to make sure my family was being taken care of during this entire process had become my focus.

I knew I needed to do something for myself but what?

In 2008, I took a new job with the market crash it was time to do something new. I really enjoyed the job, which was rewarding and I could start to feel a little bit of me coming back. I started to get that competitiveness back, that drive. My next step was finishing school, which I did. With school done I had free time for the first time in a long time, so now what?

Fast forward to 2012, work is good, the family is great, we’ve moved into a new house and my wife has gotten into running marathons. Me? I was one year from turning 40 and I had a good job and family to show for myself but what about me? I hit the scale and although I was down from 273 (268), I wasn’t where I wanted to be.

So my next focus was me.

I started with walking, and then tried these workout videos that my neighbor had, a program called P90X. I dropped 30 pounds and was 238 but more than that, my competitive spirit was back. I decided I wanted to run a half marathon and began training for that. I continued to work out and got down to 207 and ran my first half marathon.

But I was still missing something. I’ve since run 2 more half marathons and even won a 5k race, but still there was a missing piece.

During this time, life happened again.

This time my dad became ill and after a 4 year battle with an aggressive form of Dementia / Alzheimer’s, he was gone. My dad was my best friend and I’ll admit I was lost and started to turn back to comfort food, climbing back up to 230 at one point.

I focused again on taking care of everyone else, making sure everyone else was good, and took my eyes of myself. I wasn’t sure where I was going, began to question my decisions, my emotions were a wreck, and I felt I was headed that way.

My work was off, and I started to feel that insecurity setting in. Was I good enough for my job or for my family? I didn’t have anything to fall back on and I didn’t have that sounding board to push me through anymore.

As I limped along for a year, I wasn’t sure where I was headed and felt myself beginning to slide again. I started working out but with no direction, no sense of urgency. It wasn’t until a simple conversation happened with my wife that everything changed. We were getting ready to go out for the evening and I was in my usual funk.

And there it was…the missing piece. The one I’d been missing all along.

It wasn’t about pleasing anyone else; it was about taking care of me. In order to make those around me better, I had to be better, not for them, but for me. I began working out again, not to look better for my wife, but to be better for me, for my confidence.

I really put my focus into eating better, something I hadn’t really done the first time in losing the weight, and worked on more sleep. I found peace with myself; began to care less about what others said or thought and more on accepting myself and how I felt.

This doesn’t mean I don’t care for others or want to help others, quite the contrary. I grew closer with my wife of now 18 years, strengthened my relationships with my daughters, and improved my relationship with me, making time to work out, to do what I needed to make me better. Then I found Steve online and made that commitment to myself.

Getting Back To The Old Me

Since July I’ve stepped out of my comfort zone. I’ve transferred to a new position at work, still with the same company but moving up and learning something new. I’m always looking for ways to give back to the community, helping when and where I can.

Personally, my workouts have improved and I’m more consistent and actually look forward to going to the gym. I’m currently down to 215 and have dropped my bodyweight from 34.6% to 28.4% in the last 3 months. I’m also signed up to run two half marathons this year, a marathon relay, and a few 5k’s sprinkled in.

I feel like the old me, no I feel better than the old me. I’m not where I want to be just yet, but I’m okay with a work in progress because progress is what I’m making.

I have goals I want to accomplish, and a family I want to be here with for a long time, and for that to happen, I have to be here for me, accountable for me, and take care of me. I have a Blue Print, not only for workouts, but for life, to get me there, and I’m ready to make me better! 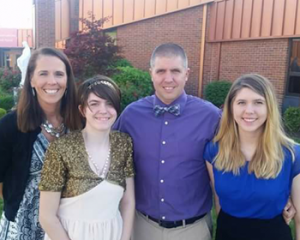 Mike has been part of the Fit Dad Nation Brotherhood since July 2016. He’s a family man that’s been married for 18 years and has two teenage daughters. Mike is a sports junkie who roots for the St. Louis Cardinals, St. Louis Blues, Boston Celtics, and Green Bay Packers. His bucket list event is to run the Empire State Building Challenge!