10 Sneaky Tips On How To Eat More Vegetables Every Day

We all know that veggies are incredibly good for us and I won’t bore you with all the nutritional benefits of them.

Instead, I WILL bore you with 10 ideas to help you eat more of them, because let’s be honest, you aren’t eating enough (and neither am I).

After 20+ years as a fitness coach and trainer, one thing I’ve seen more than anything else is people struggling to eat a high-quality diet and almost always, it’s their biggest obstacle when it comes to reaching their fitness goals.

And vegetables are at the very top of the list when it comes to high quality food. But many people don’t really like veggies, myself included, so we need to get creative in order to get enough of them into our diets (i.e. sneak them into other foods or disguise them in a way we don’t really know we’re eating them.)

But we aren’t alone in our non-veggie eating habits and this fascinating article tells us why so many of us can’t stand them.

You can’t out train your diet and believe me, I’ve tried. Instead, if you want to be lean, fit, and damn sexy, then you need to eat great food. Most of the time.

I’m a big believer in the 80/20 rule when it comes to eating whereas the 80% is comprised of things like eggs, lean meats, fruits, vegetables, nuts, sweet potatoes, and oils.

The other 20% isn’t as important when that 80% is consistent but I’d recommend staying away from the real crappy foods like high fructose corn syrup products, soda and sweetened drinks, and all that sugary stuff found in the middle of your grocery store.

And you’ll have much more success with your fitness goals and with your health in general if you make it a goal to eat multiple servings of vegetables each day. As a general rule, green veggies are at the top of the list and the darker the better.

So let’s get to one of the first obstacles we face; the prep. Let’s be honest, most of us want quick and easy and spending hours prepping food each week isn’t something we’re willing to do.

But being prepared is critical to success and here are a few ideas to make it as painless as possible.

To Prep Or Not To Prep

Sure it’s not fun and takes time away from watching Game of Thrones, but it will help you immensely if you just do it.

If you’re not used to prepping, then here are a few tips that will get you started:

But even the best tips for prepping won’t help you unless you have a plan. So I’m going to make it easy for you and show you 10 simple ways to get your veggies in.

So here are 10 easy ways to incorporate extra veggies into your diet. Aim for 3-4 servings daily, more if your gut can handle it. Be wary though, you DON’T want this to happen.

Duh. Salads are ridiculously boring though and I’ve heard so many guys exclaim “I just can’t eat another salad”

Well, there is one way to get a healthy dose of fresh veggies and that’s by preparing a mason jar salad. Try these recipes to start.

One easy way to get a ton of veggies in is to drink them in a smoothie or from a juicer. Now I can’t say that drinking straight beet juice is delicious (or even recommended), which is why I prefer to make them in smoothie concoctions.

Green smoothies are super popular and many taste pretty good. Here are a few tips to make them better if you’re going this route.

And if you’d really rather just skip all of this and use a greens powder, try Athletic Greens. It’s probably the best greens supplement out there.

3) Throw some veggies in your eggs

Eggs are the go-to staple of a high protein diet and I personally eat three or four each morning. And being someone who doesn’t really like veggies, I will often add in tomatoes, spinach, or peppers to get the extra nutrients without noticing the taste too much.

You don’t need to get all fancy with an omelet, plus you probably don’t even know how to make an omelet anyways. Instead, just make scrambled eggs and add mushrooms, spinach, tomatoes, onions, and some bacon for good measure..

I know they aren’t as tasty as regular pasta but they’re a decent substitute and are so much better for you. Here’s a quick and easy way to make “zoodles“. I didn’t know this until I wrote this post, but apparently there are poodles, toodles, and sqoodles, which all make excellent alternatives as well.

I love a nice medium rare hamburger as much as the next guy, but once in a while, it’s ok to switch out the meat for veggies. Here is a recipe for a sweet potato cauliflower burger and one for a meatless mushroom burger.

I LOVE meatloaf and cook it often. I don’t really like it with chunks of veggies in it though, so when I add them, I dice them up real small so I don’t notice. A few good options are carrots, celery, mushrooms, peppers, onions, zucchini and squash (finely shredded).

Here is a recipe I’ve used and it’s quite tasty.

Also, I eat a ton of something called Crack Slaw, which is basically meat sauteed with a bag of coleslaw mix. I get the stuff with broccoli and cauliflower instead of just cabbage. It’s quick, easy, and tastes great reheated. Add a little green Tabasco sauce on it and you’re good to go!!

7) Eat spinach instead of iceberg lettuce

Iceberg is the Walmart of lettuce; it’s cheap and has nothing valuable in it.

Sure it tastes damn delicious with cheese, bacon bits, croutons, and smothered in blue cheese dressing, but it’s a waste of your meal. Instead, opt for spinach in ALL salad situations.

Why? Because the nutritional comparison isn’t even close. It’s like comparing a Prius and Tesla for performance. Just look. Guess which is which. 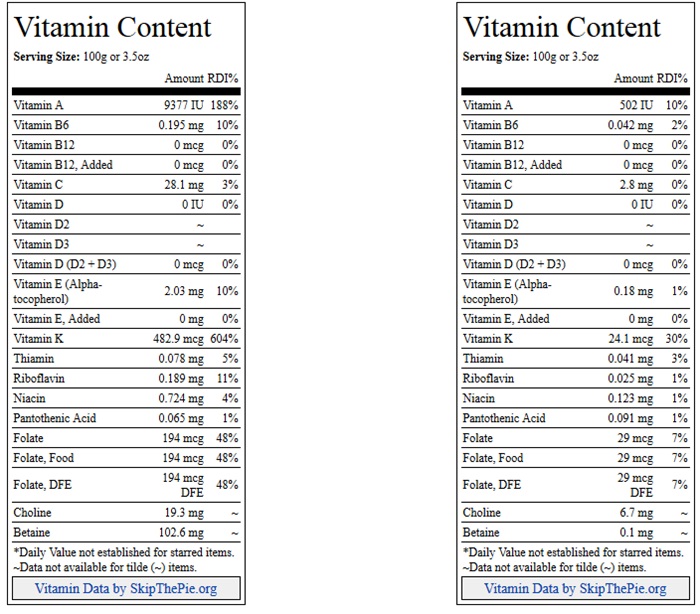 I love pizza as much as you do and while a lightly toasted cauliflower crust doesn’t sound nearly as appetizing as bread, it’s 10X better for us.

Now you won’t find these at Pizza Hut or Papa John’s, so you’ll have to actually make them yourself. And since you have no idea how to make a pizza crust out of veggies, here are 5 solid recipes that are easy to follow.

Soup isn’t sexy because it’s a pain in the ass and takes forever to eat and you can’t eat it your car. However, soup gives us a great opportunity to get a metric ton of veggies in without us really knowing it.

For example, I love meat soups. Chicken, beef, sausage, you name it. I also love pasta and rice in my soup for the texture and bulk. And I’ve found that by adding a bunch of veggies to that mix, some that I don’t even like, they are hardly even noticeable.

I rarely sit down for a meal with a heaping pile of vegetables because I just don’t like the taste of most of them. But in a soup with four or five other main ingredients, it’s easily doable.

Here are 3 of my favorite soups that are loaded with vegetables:

Rice is something I could eat with almost everything, but it’s relatively low in nutrients and high in calories, so I usually skip it if I can.

If you’re eating Paleo or Primal, then rice is a no-no and you’ll want to find an alternative that has some substance. If you haven’t tried cauliflower rice, then you should give to a shot. I’ll typically buy the pre-cut stuff to save the time and hassle of shredding the cauliflower, but it’s your call.

Here is a solid recipe for making it and it’s pretty straightforward. There are also a couple of variation in this recipe to spice it up a bit.

With a little work and creativity, even the most hardcore non-veggie eaters can get them in. Just remember, there are no substitutes for the incredibly nutrient dense fibrous and cruciferous vegetables that are out there, so skip the Taco Bell today and find those greens!