This is a post from Fit Dad Nation member, Paul Yevcak

When we consider what we consider a last resort, what truly does that mean? Last resorts in my mind mean when all else fails, that last option that you move forward with to ensure success. This can be applied to many parts of one’s life, whether work, relationships, or your personal health.  These last resorts can be the ultimate sacrifice, meaning that they can cost so much that you are unsure if it’s worth the risks.

Personally, I’ve always struggled with my weight.  To give some background, I have always been short. I stand at a whopping 5’4 and at my highest weight was somewhere around 300 pounds. To some, 300 is a lot, but not unthinkable. If one was over six feet, 300 would be considered overweight, but not so large that the individual would have a hard time living life.

But at my stature, it severely limited my life. I was physically unable to do some of the activities any individual in their mid-twenties should. Take a flight of stairs for example. I loathed stairs, because with my weight I would be climbing and become light headed and out of breath at the top. To give a more personal example, one activity I longed for was to play on the trampoline with my children. However, I by myself was almost 50 pounds over the weight limit and adding another 50-60 of children would have made it unthinkably unsafe. At this time of my life I also struggled with nicotine and alcohol consumption. More on that later.

When I was 25, I went for my annual physical. My doctor looked at my blood pressure and threatened that if I came back in with that high of a number that I would have to be put on medicine. He saw my blood work and started to list off the diseases I would be developing in the very near future if I did not get my health under control.

At this point I was exasperated, he knew that we had discussed different weight loss plans more times than either of us could remember. He said to me, “Paul, if you don’t get on track, I can’t guarantee you will make it to 50.”  Wow. Talk about a smack in the face. I was dumbfounded. Fifty? That was it?

I had already lived over half my life and for what? booze, cigarettes, and terrible food? But what else could I do? I tried it all: South Beach, Keto, Intermittent Fasting, Atkins, Weight Watchers. You name it, I have probably tried it or some variation. I would lose about 15 lbs, and stop. Flat out. No more would come off, so I would get frustrated and give up just to gain all the weight back and then a few more.

Also at this juncture my marital life was not the greatest, as we enabled bad habits for each other which made it difficult to maintain. Bariatric Surgery was the only option according to my doctor, the last resort, and he wanted me to do it immediately. Fast forward 2 months, kicking my nicotine and alcohol habits along the way to be on the table to have a Vertical Sleeve Gastrectomy.  For those unfamiliar, they remove 75-80% of your stomach to limit intake in one sitting. The result is a restrictive procedure that allows one to lose weight. I went about a month without a single solid food meal, relying mostly on protein shakes for sustenance.

That was in August of 2017. I spent my 26th birthday drinking a protein shake with a candle on it! Fast forward to February 2018. The wife who had gone down this path kicked me out. At this point I had lost 110lbs from a starting weight of 271 to 160.  I was a completely different person at this point. I enjoyed how I looked and was embracing the lifestyle. She did not nor did she want to.

After this I lost another 20 pounds and my alcohol and nicotine consumption resumed. I then kicked those after a month or two of drowning my sorrows and rebuilding my life for myself and my kids became the main priority. I was hovering around 140lbs at this point, and I went to the opposite extreme of when I started the process. I looked sick, and I was still unhappy with my body. My health was that of a teenager, my BP and Cholesterol were incredible, and still are to this day. However I understood that I needed to build muscle mass.

In May of 2018 I got the fire lit under me. I said enough is enough. Alcohol became a treat once in a while and nicotine was gone completely. I was ready to become the best version of myself possible. It was now or never, my second last resort.  If I didn’t do something, I was afraid I was going to keep losing weight until I looked literally like a skeleton and encounter other health issues that I hadn’t before.

Gym application in hand, and a tub of protein powder in the other, I started my journey for gains.

Today is Jan. 21, 2019. My health and fitness are the best of my life and it will only continue to get better. I workout at minimum 4x a week, with very mild cardio on the days I don’t make it in to the gym. I am liking my results more and more, (and so is my new girlfriend!)

If you are asking why I wrote this, it’s not for sympathy or praise. This couldn’t be further from the truth. It is to show others that it’s OK to feel like you’re facing your last resort.  As long as you never give up and never accept defeat, HOW you get there is never an issue. It is WHY you do it that matters.

My ultimate reason to take the last resort? I was terrified knowing that I wouldn’t be there for my kids later in life. I wanted to give them the best of me and lead by example; to show them that when your back is against the wall, you must keep moving forward.

Fight the good fight and never give up nor surrender. Life is worth living when young eyes are staring up at you. 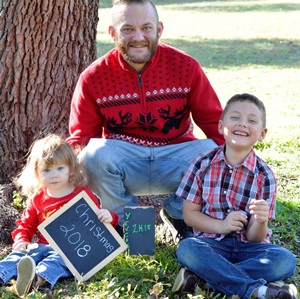 Paul is a single father to Abel and Shelby and lives in central Texas. He works in human resources and is currently completing his MBA. Paul spends his free time in the gym,  with his girlfriend and children, and playing with his dog, Bosco. Hobbies include outdoor activities such as hiking, camping, and kayaking.