Learning From My Mistakes

This post is from Fit Dad Nation member, Stephen Southward

Hey dads, I’ve been spending the past couple of days trying to think of what to write this post about and all I can come back to is just telling my story and the lessons that I learned, and hoping that they can inspire you and help you learn from my mistakes.

“Learn from the mistakes of others, for life is too short to make them all yourself.”  This is going to be the theme, moral if you will, of this story.

So, like every good hero there need to be a back story.

I’m currently a single dad to a wonderful and very energetic 7 year old son and I am probably in the best physical and mental shape of my life.

The Struggle Is Real

Years ago when I graduated college I weighted in at 300 lbs. I was absolutely miserable: with my weight, with my life, with myself.  I carried on just floating through life and making halfhearted attempts at doing something about my weight but I never really put in 100%.

I came to learn later that I was struggling through a battle with anxiety and that was the root of my eating and weight issues. I like some or maybe even many of you used food as my coping mechanism.

So, until I had a handle on my anxiety I would never win the battle with my weight. Eventually through many starts and stops and attempts I dropped down to 250lb but could not seem to lose the rest of the weight. See the previous statement as to the reason.

It was during all this that I met my son’s mother and we began to build a life together. Here is mistake number one: don’t have a relationship with a subordinate at work.

Now I won’t bore you with the nitty gritty of all the filler, so we will fast forward.

Mistake number two: seeing but not wanting to see. My son’s mother through various medical issues developed an addiction to prescription painkillers and I always knew that there was something not quite adding up, but I didn’t want to see it.

If I saw it then I would have to acknowledge and face the truth and the pain that would surely follow. As with all things, the truth has a way of being seen, always. Shit hit the fan and her addiction spiraled out of control and I couldn’t not see it anymore.

She got clean and we tried to pick up the pieces of our lives and life together, but this was short lived. She relapsed and I repeated mistake number two… Sometimes we have to learn things multiple times for them to stick.

By this point I was broken and broke. I decided it was time, I couldn’t live this cycle again, I couldn’t continue to not see the truth. And I did something that I never thought myself strong enough to do, I left.

Now I’m not saying I just mic dropped and left. I moved out and filed for custody of our son. This is the point where a lot of you cringed. I was one of the lucky dads. I had the better school district and a lawyer. I received primary residency with joint custody and a custody agreement that ensured that neither party had to pay child support.

It was a win and I needed it.

It Doesn’t Get Easier, You Need To Get Get Better

I learned this lesson the hard way. I was dealing with my anxiety and trying to navigate being a single dad to an emotionally distraught little boy who didn’t understand what the hell was going on. So after a year or so of just barely hanging on, I decided it was time to do something about it.

It was time to grow and began the process of becoming the father that I needed to be. I finally came to the realization that I was the model that my son was using for who he would become, therefore I had to be better.

This meant that I need to get healthy both physically and mentally.

I had to deal with my anxiety and all the issues that stemmed from this, so I had to grow. I found an outlet for my anxiety, running and exercising. This enabled me to finally get rid of the extra weight, through exercising and changing my eating habits.

Today, I am in the best shape of my life both physically and mentally and one cannot happen without the other.  Being fit mentally, this includes emotionally, will enable you to be a better dad and give you the inspiration to be better physically.

Being fit physically will enable you to be a good role model and allow you to focus on your mental well-being and not what hurts. This will ultimately lead to our children learning what they need to be successful and what it take to be better than we were.

We can enable them to learn from our mistakes without having to make them for themselves.

Thank you for listening, or is it reading, to me today. I hope that by looking at my mistakes and my story you can learn and grow as dads. I know that I couldn’t have become the person that I am today without the experiences that I’ve had or the mistakes that I’ve seen others make. 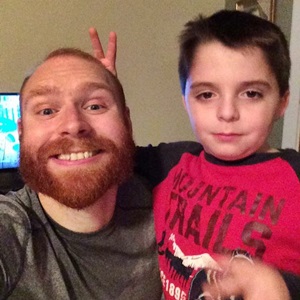 Stephen is a single father to his 7 year old son, Hunter and is an avid cook and fitness enthusiast. In just the last few years, he’s dedicated himself to getting into the best shape of his life and plans to run the Hartford Half Marathon in 2017.