My sense of horror evolved to a general anger and then scorn.

It was a cold Michigan May evening in 2014. I was sitting at a local restaurant with my, then, 8-year-old daughter, Joni. It was going to be a special night for my little lady and it should have been special for a lot of young ladies. I had my doubts, however, as I looked around the restaurant.

From my seat, I could see the host stand as well as multiple different tables situated around the joint. Everywhere I looked, there were young ladies dressed up in beautiful dresses with their hair put up in various styles. Some with tiaras. Some with ribbons. Some with sequins and jewelry. These young ladies had clearly put a lot of time and effort into their outfits for the evening.

It was the night of the first Daddy/Daughter dance I had the privilege to attend since my daughter started public school. Prior to this, my four children had been homeschooled. The divorce and relocation of my family back to our home state of Michigan from West Virginia had put an abrupt end to that endeavor. The details of that painful transition, it’s causes, and its results are a story for another time, though.

When I had heard about this event, I knew that I wanted to take the opportunity to exhibit to my daughter what she should expect from anyone she would actually date in the far far far… faaaaar future. I wanted to set down a foundation of expectations.

I try and do this in all my interactions with my children, but this specific event seemed to be a prime occasion to use as an object lesson. From day one, I began helping her to prepare. I took her dress shopping and helped her pick her colors. I then asked her if she had any thoughts on what she would like me to wear and she let me know that, “one of your work clothes will work.” At the time, I dressed in formal business attire and I agreed that I could certainly do that for her.

I then asked what kind of food she’d be interested in getting for the evening and she told me that a lot of her friends were going to be headed to a restaurant near to where the dance was being held. I agreed and made reservations. Prior to the event, I ordered her a corsage that matched her dress.

I also rented a Dodge Challenger in which to drive her around that evening (I own a giant scary white van. Not cool at all). I went and got a haircut and ironed my clothes. I even put on cologne. Finally, I stood in front of the mirror and asked myself if I was honoring her desires with my appearance.

I felt that I was.

I drove the Challenger over to her mother’s house to pick her up. She was unaware that I had rented the car and was ecstatic to see the sapphire blue sports car drive into her driveway. Then I got out and presented her with the corsage (another surprise). She was glowing. We did some pictures and then I walked around the car and opened her door (something I do for her fairly often). She buckled up and then we pulled away. She put on some music that she enjoys and cranked the volume up to 11… (most only go to 10… I had mine made to go to 11).

Without being a complete fool, I took her around the country side demonstrating some of the things the car could do (drive it like you rented it, right?). There was a lot of laughing and hooting from this tiny girl in the passenger seat. It was a blast.

We arrived to the restaurant and were seated in a timely fashion. This is where my inner angry dad made the appearance mentioned at the beginning of this essay. I sat there and looked around the place at all these young ladies that had clearly gone out of the way to look their best.

Then There Were The Dads…

With few exceptions, the dads were dressed in khakis, polo shirts, and sneakers. Most had baseball hats promoting one golf club or another. They looked bored if they weren’t talking to another dad and if they were, the young lady was left sitting there looking around for someone who would care she was there. My heart broke for these little ladies. This was the appalling part.

The anger was sparked when I heard the following conversation between two dads that were waiting to be seated:

Dad two: “Right. My wife wanted me to wear a suit, but I wear that shit all day at work.”

I watched as their daughters stood at their sides looking around. Hearing these words come from their dads that demonstrated to them how little importance that these men put on their desires, their needs, their feelings.

That’s when I got angry.

I fumed inwardly. I wondered if these men knew what they were doing. The damage that they were incurring by their actions. Perhaps it seems I am blowing this out of perspective, but here’s the thing. If they are like this during special occasions, what are they like daily?

Saddened, I turned my attention back to Joni and we ordered. I asked if she’d like me to order for her or if she would like to order for herself. She asked if I would and I did. She drank some Shirley temples and I had a beer. We finished our dinner and headed to the dance.

I’ll be honest. It was about one thousand degrees in the hall. There were a million girls between first and fifth grade running around screaming. The music was lame and I hate to dance. This was not an environment that I would normally voluntarily enter.

It’s Not About Us, It’s About Them

However, that’s the point. It wasn’t about me. It was about her. About providing her with an example of what masculinity and fatherhood should look like. Providing her with a foundation from which to measure all her future encounters with men.

The point, if you haven’t gathered it yet, is that we have a very serious duty in front of us as dads if we have daughters. We have an uphill battle against television, movies, magazines, and social interactions provided in their scholastic careers. Places that teach our young ladies that men are shallow and unfeeling.

A world that teaches young women that their dads would rather be watching sports or golfing than cherishing them and respecting them. A society of men who would rather sit and scroll through their phones than ask what Little Pony happens to be her favorite this week.

We must do better.

They deserve the best.

I grew up in an annihilated home. Broken home is too nice a term to use. My older sister grew up to be a wreck of a woman. At one point, during her teen years, I heard my father say, “she didn’t learn that from me.”

I know, now, that is not true. She did learn it from him. She learned from him that to get a man’s attention she needed to operate in all the ways that none of us ever want our daughters to operate.

By allowing our laziness or preferences or comforts come in and dictate how we will raise and interact with these young women, we set them on a path that is almost certain to be far less than what we want for them.

Open your eyes and be deliberate about how you raise your girls. If she wants to paint your nails, let her paint them. If she wants to braid your beard (if you’re man enough to grow one), let her braid it. Does she want to do your hair? Let her. Take her to get pedicures (trust me, they are amazing…). Go into Justice with her and look at the clothes she likes.

Take the time to play with her dolls, to watch her shows with her, to listen to the music that she likes with her, to pull out her chair, to open her door.

Take the time so that she knows how she deserves to be treated when she becomes a woman.

If you don’t have daughters, then raise young men who know these things. Young men who will defend rather than abuse women. 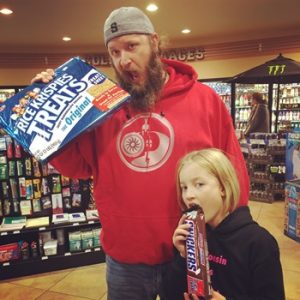 Joshua is soon to be 40, divorced, and trying to be the best dad that he can be to his four awesome kids (3 boys, 1 girl). Works from home as a Health Information Technology Consultant and loves what he does.