From Strong Man To Strongman

This is a submission from a member of The Fit Dad Nation, Doug Newman.

Throughout my adult life there have been unforeseen obstacles that have shifted my personal goals, but my family, professional career, and being in shape (while finding balance between them) have always remained at the top of my list of priorities.

Growing up, I had always been active in sports whether it was tennis, basketball, track or swimming.  It was through swimming though, that I found my passion and it was this passion that ultimately helped to define me as a person.

During college I had the privilege to swim competitively and also play water polo and I was able to do this while working two jobs and being a full-time student with a GPA that consistently put me on the Dean’s List. It would be this work ethic and time management ability that would allow me to remain active in my future years.

As I transitioned from college to being a professional, I was still interested in being physically fit, mostly for vanity reasons as I always wanted to look good with my shirt off.

I had a gym membership and signed up for a subscription to Muscle & Fitness and I followed their monthly training plans and incorporated my own cardio.

Early on, my training schedule would consist of training four to five days a week.  As my confidence in my training and my understanding of how my body responded to training improved, I began to train each body part twice a week.

I would focus more on aesthetics and not so much on physical strength and as my life changed and my responsibilities increased, so did my training.  By the time I was 30, I was a father of two very young children, a full-time teacher and coaching three sports.

So, I had to reevaluate how I did things.

This reevaluation and shifting of priorities led me to give up my gym membership, and build my own home gym. I bought a squat rack, a barbell, and dumbbells and over the years, I have added onto it.

I looked for items that people were giving away for free, and buying a new piece of equipment every year. As my life continued to evolve, so did my fitness goals.  I began training late at night after everyone went to bed.  Usually my sessions would begin around 9:30-10:00 at night once my family obligations, school, and coaching duties had been fulfilled for the day.

I would research how I could be more efficient with my training in order for me to get some sleep. I am not the fastest person when it comes to working out, so I would always research workouts that would streamline my sessions and afford me some valuable time to sleep.

This came around the same time I was looking for better ways to train my swimmers while looking for ways to improve their dry land exercises.

During my research I discovered CrossFit, which at the time wasn’t nearly as popular as it is now.

First, I tried it with my athletes and saw positive results.  I then decided to slowly integrate CrossFit into my late night workouts and almost immediately enjoyed my results. Then for Father’s Day I was gifted with a membership to a CrossFit Box.

And my first day there I was hooked.

It satisfied my competitive nature and I would schedule time to WODs (Workout Of The Days) around family and work. When time did not permit me to go, I would train late at night at home.

But I soon realized my workouts transitioned from purely selfish and vain reasons to working out with the sole intention of being fit. I needed to be able to keep up with my kids and more importantly, to watch them grow up.

By late 2014, early 2015 my world exploded…and not the good kind of explosion. Dealing with the infidelity of my ex-wife, as well as a torn ligament in my knee, everything changed, especially my fitness goals.

From Strong Man To Strongman

This time, my training was purely therapeutic both physically and mentally. It was a way to clear my head as I started to rebuild my life. I was not going to allow personal struggles to defeat me or define me.

During this journey I met a group of people who were training  Strongman. This was completely by chance as I was attending a seminar on Olympic lifting to improve my CrossFit performance.

One of the presenters, who is one of the best Olympic lifters in the state, encouraged me to meet up with him at his gym promising me that he would make me strong. I was reluctant to go, but I did. I went a few times but hesitant to commit fully and would only show up once in awhile since I was still committed to doing CrossFit.

But I stayed in touch and began training more at home again instead of doing CrossFit full-time. As I was recovering from my knee injury Tony, the presenter, suggested that I do Smolov Squats to build power and strength.

I did as he suggested and I did get stronger and all of my lifts began to improve. Then Tony asked me to compete in a local strongman competition he was running. Unwillingly, I competed and I did OK. What I really mean to say is that by “doing ok” I did not embarrass myself completely…

Then he offered to do my workout programming, and of course I jumped at this opportunity. Since then, not only have I gotten stronger, but I have also competed in several other Strongman competitions.

Above all, this Strongman group has helped me rebuild.

It gave me a place to identify with and belong to as I was gong through my rehab and my divorce. They allowed me to not only rebuild my body but also rebuild my spirit. They helped me to rediscover who I am and what is truly important. Through this group, I now have a focus and a purpose to my training.

In the two years or so that I have been working with them I have accomplished feats of strength I never thought I could accomplish; I even qualified twice for Strongman Masters Nationals. This is something that I would never have had even thought of a few years ago.

I am so glad that I found Strongman or better yet, it found me.   Without it, I would not have been able to get out of that dark period of my life as quickly. Recently, I have been watching a lot of YouTube videos in order to take more ownership over my training.

This personal embitterment came after being encouraged to do so by the leader of our Strongman training group.  One of the people that I have begun to watch regularly is Dave Tate. In one of his videos he touched on this topic of training and priorities.

He articulated what I have had in my head for some time. He said that if you are looking for balance in life, it’s not going to happen. Life gets busy with family, work, whatever. But, fitness can still be obtained. Find what is important to you and do it.

If it is important to you, you can make it happen.

Pick one thing and do that one thing, whether it’s powerlifting or running a 5k. So regardless of time, family, or money there are ways to get fit, even if it’s just going for a walk with a stroller.

As I continue to grow as a father, teacher, coach, and masters’ athlete, I could not have gotten to where I am without several people.

First, my loving and supportive girlfriend; second, the continued ass kicking, honesty and encouragement I get on a weekly basis from the best strength coach in New York State; and finally, my parents who have been extremely encouraging as I rebuild my new life, which is happier than the old life. 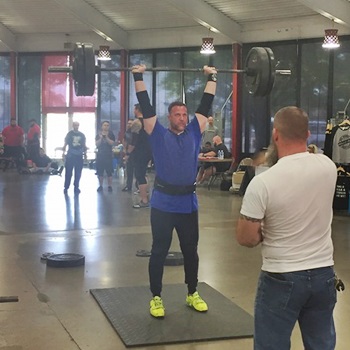 Doug is a 41 year old single father of two and a special ed and social studies teacher in New York. He coaches swimming and track and has been physically fit and active his entire life. He spent years training with CrossFit and now competes in Strongman events.